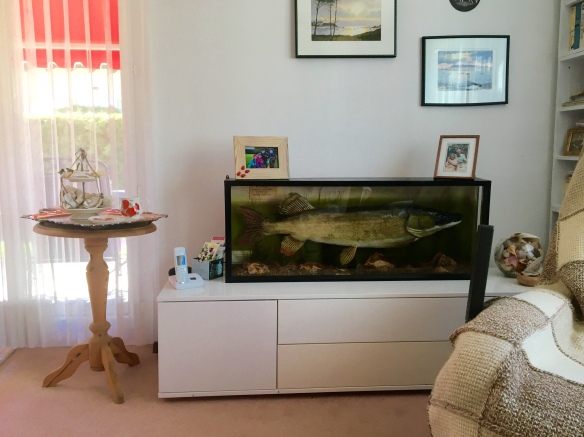 The Pike has landed!

I’m sure he is very relieved to be out of his plywood case and able to look around him again, although in unfamiliar surroundings far from his native pool – which no longer exists anyway. There are some who think that I (and those of my family who have aided and abetted me in this undertaking) have gone more than slightly mad. There are many who wonder why on earth my father ever had Mr Betteridge stuff the biggest fish that didn’t get away in the first place, and why The Pike was mounted and displayed in my parents’ front room for nearly 70 years.

I understand my Dad, though. Apart from his wartime service in the RAF, the capture and landing of The Pike was his crowning triumph. He no longer had to stretch his arms out when boasting to his friends: the proof was there, his greatest trophy glaring at him for the rest of his life, with its “malevolent aged grin” (Ted Hughes)

Dad with his prize catch on 31 July 1950. Note the old Anderson air-raid shelter behind him, converted into our garden shed!

I told the tale here a few years ago  What I didn’t realise then was that actually, my father hadn’t gone fishing on his motorbike but on a normal bicycle. That makes the story even more amazing! Imagine riding your pushbike home, uphill all the way, with a metre-long live (and lively) pike strapped to the crossbar – presumably with the head (and those teeth) peeping over the handlebars. (Pause while you let your mind boggle …)

After my mother died and we cleared my parental home, my daughter had a few pieces of furniture and objects of sentimental value packed up and shipped to our holiday home in Brittany.

The Pike was wrapped in blankets and stowed away in a specially made plywood crate, with the intention of bringing him to stay with me in Switzerland. Alas, this crate was too big and bulky to be transported in a normal sized car when there were passengers and dogs, as is usually the case when any of the family goes to Brittany: it is a holiday home, after all, and the family also needs luggage when they go on holiday. And so when all the stuff from England arrived in Brittany in October 2018, the plywood crate was parked in the garage and there it stayed – until this Easter Sunday, when my daughter and I loaded it into my granddaughter’s VW people-carrier and brought it triumphantly to Switzerland (and no hassle at the customs, either!).

My granddaughter needed her car back – she had been forced to manage without it for all the weeks we were “confined” in France – and I wasn’t going home for a while because of my “vulnerable” status, so the crate remained under the stairs in my daughter’s home for another 4 weeks. Then we borrowed the VW again, and last Thursday I was returned victoriously to my own home, together with my loot, where the screws were removed from the crate. My son-in-law had been forecasting dire consequences of all the bumping about that it had undergone, and would not have been at all surprised to find the glass case filled with piles of dust and fish scales. But as the blankets in which it was swaddled came off, The Pike emerged unscathed, just a bit dusty on top.

Now here it stands in all its glory, still looking as if would like to bite your arm off given half a chance, on what the Germans call my “Lowboard” (low sideboard) which is the perfect size and height for it. In fact, it’s rather strange to have it at this height: at my parents’ house it was always at adult eye-level. Now it’s at a child’s level. Over the years, it has terrified and fascinated small children, the nearest thing to a real monster that they had come close to. My great-grandchildren all saw it, way above their heads, at Great-Granny’s house, at a “safe” distance. How will they react now?

Their father is also an angler, as is his father, and the kids have all been on fishing excursions with their Papi and Opa, and have even managed to catch fish themselves – we had some delicious trout last week caught by my five-year-old great-grandson.

Trout caught by my 5-year-old great-grandson and his Daddy, cooked by my son-in-law – shared by son-in-law and me!

But The Pike, at close quarters, is something else.

It isn’t unusual to find antlers from deer, chamois and other cervidae mounted on plaques and hanging in Swiss homes. However, I don’t know anyone else with a stuffed fish apart from some old friends who had a huge stuffed swordfish on their wall in Palo Verde, California, and that was a very long time ago.

It’s nice to be back. I have had a great nine weeks of very congenial company, which was far better than being stuck in solitary confinement at home, but now I shall enjoy my solitude for a little while. My pampering continued right up to the moment of my return, as my daughter and son-in-law had been shopping for me and I have enough food and other necessities to last for a very long time. That includes tea, toilet paper and yarn.

And on the subject of yarn: my crocheting continues apace! After I finished my heirloom Corona blanket, which used up almost 33 balls of wool, I had 7 balls left and crocheted a sham pillow-case to match. Forty balls of wool at 75 m each gives a total of 3 kilometres but in fact, as I often noticed a mistake on a previous row or even several rows back, I had to unravel and re-work many times so I probably crocheted more like 5 km of wool in this marathon effort – and was very surprised when my daughter informed me that it had only taken me just over 2 weeks to do!

Of course, my fingers now can’t keep still. It’s a permanent affliction, like St Vitus Dance. If I’m not writing on the computer, I’m crocheting. My tally so far:

Cardigan, started during my visit to my Middle Granddaughter in February, using wool donated by my daughter (see Repair Your inner Rainbow)  Not exactly according to the original pattern, which was shorter in the body and longer in the sleeves. I prefer mine.

Shawlette in white cotton, would have been bigger if I had had more yarn. This is a pretty pattern, starting with the bottom corner or point, so you just keep going till you run out of yarn.

Four market bags (I’d call them tote bags) for my daughter and each of my granddaughters, colours appropriate to each. A steep learning curve for me, as the pattern – by Drops – was basically just a chart of one seventh of the finished semicircle. I had never worked from a chart before, without any instructions such as to how many stitches I should have at the end of each row and what I should actually be doing with each stitch, so I felt I had been transported to Bletchley Park. Little by little, it became clearer so each subsequent bag was slightly different from the previous one, though nobody would know! By the time I got to the fourth bag, I had almost figured it out so I have bought some more cotton yarn to make another one, this time doing EXACTLY what I’m supposed to.

With the leftover yarn from these bags, I made two doll figures. VERY scary! They look like something from a Frankenstein story. Not to be given to children, I think! Not sure what’s going to become of those and I must protest that I am not deliberately setting out to scare children, whatever circumstantial evidence you may produce.

Frankenstein’s monster and his bride …

Another shawlette in a ginger wool/silk mixture donated by Middle Granddaughter in February with pretty autumn-leaves-coloured merino from my daughter for the edging, but only just worked up in the same pattern as the white one. I was the one who got worked up, actually. Following a tip from a dear friend who is a knitting whizz, I wound the wool around the cardboard middle of a toilet roll. The idea of this is that when you slip the cardboard roll out, you have a nice relaxed ball of wool with an end poking out of the middle. The advantage is that as you use up the yarn from the inside, the ball itself stays still and doesn’t race around all over the place. Yes. True. 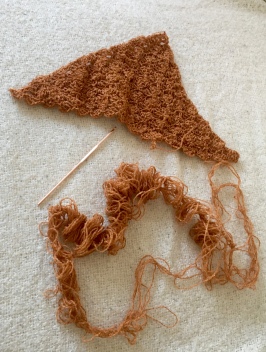 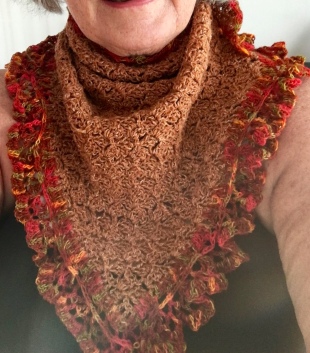 The disadvantage is that sometimes you get what is called a “yarn barf” when the emerging string of yarn disgorges an attached lump of not-so-well-wound wool which, if you are lucky, may just mean you have a few yards more than you really need between your work and the ball, or if you are unlucky, you have to disentangle a cat’s cradle.

I’m not saying I was unlucky. I just didn’t wind my yarn as expertly as I should have done. My “barf” was more of a disembowelment. I am proud to say that I spent four hours patiently undoing the Gordian knot. And then finished my shawlette.

At the moment, I still have most of the wool my daughter gave me back in February, so this is an opportunity to mix and match and see what transpires. Not getting bored, anyway. 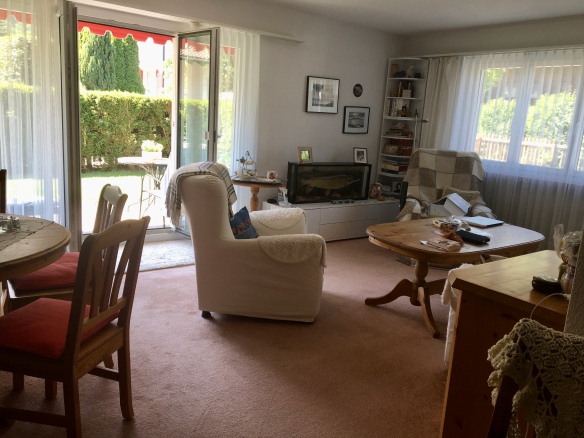 9 thoughts on “Fish Out Of Water”