As the mother of three and grandmother of four lively kids, my daughter is never at a loss to find some kind of absorbing activity to distract a bored and wandering mind. That ability she also applies to me, so when I was casting around for something to occupy me while listening to podcasts in the evening during our recent holiday, she generously presented me with several skeins of a beautiful soft yarn, Drops Lace. A light, very fine mixture of baby alpaca and mulberry silk, in pale pink and violet, it felt like gossamer. I caressed and cuddled it for a while, wondering what it wanted to become, then took a small sized crochet needle and began to cast on.

I wasn’t sure what I was making, and after several rows of mesh it was clear it wasn’t working. I unravelled it and started again with the yarn doubled, one of each colour. I liked the colour effect but the small-sized crochet hook made the stitch fiddly and the mesh pattern was not at all satisfying. It kept me busy for a few hours, though, and unravelling the fine yarn was even more absorbing than the crocheting so my daughter was able to get on with her knitting in peace.

When I got back home again after the holiday, I fished out my unsatisfactory work and carefully undid it all yet again. The Internet (Jonna Martinez’s youtube tutorial at https://www.youtube.com/watch?v=vI4U53yFjuo) had revealed a stitch I thought might suit this delicate yarn, a variation on a shell stitch, softer and more feminine than the fishnet pattern, and as I had several kilometres of yarn I was hopeful that there might be enough to make a small shawl.  There was. And even some left over.

Another ingenious idea popped up here https://www.youtube.com/watch?v=i72FFsQyy74 on youtube. I love Kristin’s facial expressions as she demonstrates her method, she’s having such fun. I wish I had seen that before I spent so many hours winding up my little balls of yarn, as fine yarn tends to stick to itself and tie itself in knots. But maybe next time.

This time I used a size 4 hook instead of a size 2, which made the work easier. I had three skeins of pink and two of violet, so I used two pink threads to one violet for the main body of the work, then worked four rows of double-thread pink, followed by two pink threads and one violet. I realised I was now running out of pink so swapped to two of violet and one pink, then finally finished off with double-thread violet, which gave a nice shaded effect towards the edge. 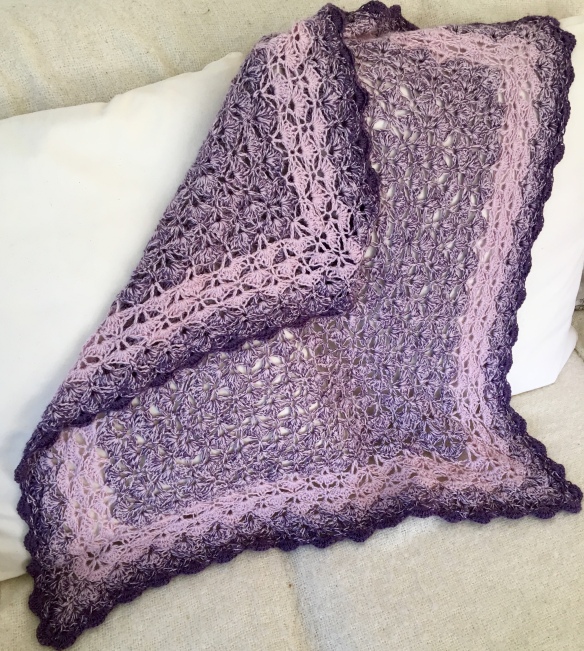 The pattern needs a bit of concentration at first, but isn’t really difficult and of course repetition makes it automatic after a while. For me, that’s dangerous as I then lose count and make silly mistakes, but I caught and remedied most of them. I console myself that in Islamic art, there’s always a deliberate mistake because only God can create perfection. Who’s going to notice, anyway? My shawl is far from perfect, but I think the yarn is happy in this form.