It was a good event, at least as far as I could judge. A motley audience of around two hundred, of all ages – obviously, some of the boys’ friends had also come along for moral support – and the books were selling like hot cakes. Joséphine and Désiré looked like royalty, and were kept busy signing book after book all evening, and were clearly on a high. Their sons have grown into tall young men, handsome, polite and very personable, and well integrated into their Swiss environment. They certainly appear a very happy family, and were gracious hosts. 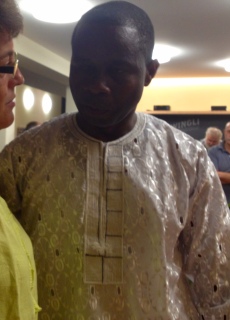 My friend M is their Swiss “mother” so we decided to travel together by train. We arrived a few minutes late in spite of having planned to be there half an hour early: the Fates in charge of trains had other ideas for us. Oh no, the train wasn’t late – this is Switzerland, and delays are few and far between. It was our own fault. We had an ample five minutes to change from platform 3 to platform 6, and hopped onto the train standing at platform 6 without checking. It left on time, and then a few minutes later stopped in the middle of nowhere.

We sat patiently, chatting, and then a conductor happened to pass through, did a double take, and asked what we were doing there. We told him where we hoped we were going, and he informed us that we were on the back end of the train, which had been uncoupled! Never mind, stay put. This is the next train; you’ll just be half an hour later than you expected.

We were being met at our destination, so we took out our smart phones to let Joséphine know the situation. Oh dear! She had called me earlier on my landline so I didn’t have her number in my mobile, but M said she had recently received a text from her, so she ought to be able to find it. Unfortunately, she had only had this smart phone two days, and it was so smart she couldn’t find her old text messages. It wasn’t the same make as my mobile, so I was no help.

Suddenly her phone rang, and she recognised the number as Joséphine’s – but what was the procedure for answering? She pressed what appeared to be the main button, but the phone just kept ringing and then stopped. The number was still visible on the display, so I started to copy it into my phone – then it disappeared.

Luckily, Joséphine is persistent and rang again, so this time I got the number. As soon as M’s phone stopped ringing we called back from my phone and explained what had happened, so someone was able to meet us after all. A good thing, as we would never have found the venue alone! After ten minutes’ brisk walk, we were there, and hadn’t missed too much of the introductory talks. Our apologies were brushed aside with the remark, “You’re among Africans! Time is nothing!”

They refrained from suggesting that we attend a course for Seniors in how to use their smart phones.