It’s very easy to get sidetracked when looking for ancestors. Graveyards yield some notoriously weird and wonderful inscriptions, and despite the adage of nil nisi bonum you can find excruciatingly candid obituaries in old newspapers.

Glancing this morning through the parish records from the late seventeenth and early eighteenth centuries of a small village on the Welsh-Shropshire border, which may or may not have been the birthplace of some of my forebears (I didn’t find any), I discovered that the tops of several pages had been eaten away by mice. Then, on the page for early 1708, the nibbling is followed by scribbling. It says: “The Mice play while the Cats sleep. Ecce.”

Undeterred by the apparent lack of personal connections to the village, I was nevertheless drawn to continue reading by such entries as these, which set me inventing biographies for these poor souls so laconically dismissed:

I also wonder whether there were rules governing which language should be used in these records. Is the use of English part of the anti-catholic attitudes engendered by Cromwell’s Commonwealth, and Latin a reflection of the rise of the High Church after the Restoration? I think of the celebrated Vicar of Bray, who survived by adapting to the prevalent religious  climate.

Early seventeenth century entries are in English, with widows described as “relicts”, then they are mostly in Latin up to about 1700, but English is creeping in. In 1695, every entry is in Latin except for “John ye son of William Harries, a stranger, and Jane his wife, was born ye 13 and baptized ye 18 of October, 1695.”

Tailors and weavers are noted as sartor and textor; pauper and poor man appear with equal frequency, but there is no Latin equivalent for a yeoman. And although names are sometimes Latinised (Owenus Williams for example) or “Gulielmus, f. Gulielmi Tomkins, de Llynclys, yeoman, & Hannae, natus 11 Oct.“ at his burial, this same William has become semi-anglicised to “Wilielmus Tomkins de Llynclys.”

I’m also intrigued by another entry: “Collected upon ye Brief for ye poor distressed Palatines ye sume of seventeen shillings in ye year 1709.” This probably wouldn’t have caught my eye if I hadn’t recently been researching German ancestors who were definitely “poor distressed Palatines”, but now it strikes a chord. Here, in a tiny Shropshire village, more than a thousand miles away from the Palatinate, alms were apparently collected for the victims of those seventeenth-century devastations. 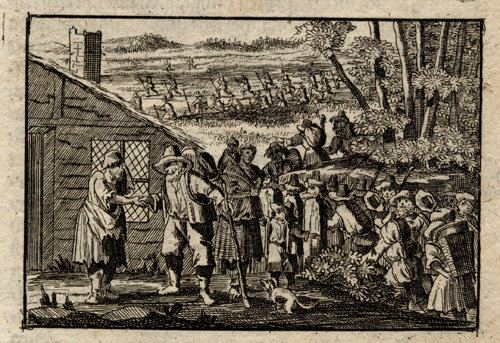 My curiosity piqued, I investigated and discovered that bad harvests, severe winters and famines in 1707 and 1708 led to about thirty thousand Germans following hollow promises in 1709, leaving their homes and flocking to Rotterdam, where they hoped to embark for a new life in Carolina. Many of them got no further than England, where about 13,500 were settled into refugee camps.

The seventeen shillings collected in my Shropshire village were in response to a plea sent out throughout the country by Queen Anne. Click here (if necessary, click again on the pdf version) to read the sad story, a tale of misery, negligence, poverty, disease, starvation and violence. Thousands perished. A few survived the voyage and made a new life in the Promised Land. 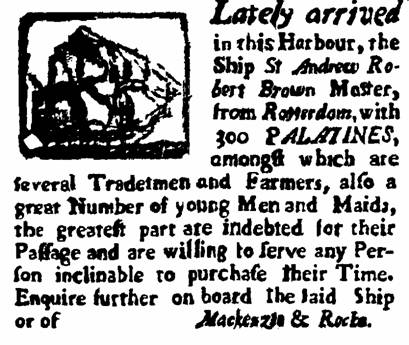 Once again, genealogy has revealed a chapter of history of which I was totally ignorant and linked two different sides of our family tree.

“By late June, 6,500 German migrants had crowded into east London and the surrounding countryside. A committee established by the government to oversee the migrants’ welfare soon moved most of the Germans to two large camps south and east of London at Camberwell and Blackheath, and on June 16, the queen authorized a nationwide charity drive to raise money for the “Relief, subsistence and settlement of the poor distressed Palatines.” As the British government searched for ways to care for them, the German immigrants continued to pour into London. By late June the queen’s ministers insisted that Dayrolle (British representative in The Hague) stop the flow of Germans across the Channel. Notices placed in the Cologne Gazette warned that no more German immigrants would be allowed in Britain. In addition, Dutch officials, who had no desire to support any stranded migrants, employed two ships to patrol the lower Rhine and turn back boats of German peasants. Despite such efforts, the migration did not slow until late summer; by that time 13,000 villagers from across the German southwest found themselves settled together on London’s outskirts.” To read more click here.

10 thoughts on “From The Welsh Border To The Palatinate”